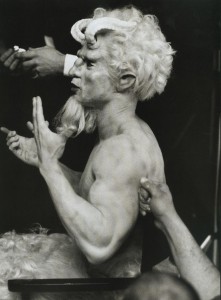 Horned One: Matthew Barney, an Aries, obsessed with his male-distinguishing parts

Aries rules of the ages of birth 0-7 years, literal birth being foremost a bloody fight for life and survival, and, both actually and metaphorically, a quest for meaning and purpose. When we are amusing and suffusing ourselves with Aries energy we are endowing ourselves with the energy of new beginnings, a clean slate. Aries is the cardinal-fire sign, which is characterized as a spark, our ignition. That god Mars (Greek: Ares) namesake of the sign’s ruling planet, most embodies that sparky, initiating spirit of the sign—he is the war god, armed for the bloody fight of life, adrenaline fueled and headstrong like the sign’s emblem, the ram. He is that fight instinct in all of us, pure energy, or rather, energy incarnate—these are what the muscles are. They are the part of us that provide evidence of our being wo/men of action, in whom fight (and indeed flight) are possible—we lose muscle mass when we are inactive. We don’t cease to exist, we just get fat and flabby. But life is evidenced in the bloody lean meat of our very being. Mars, the red planet, rules the blood and also the element of iron which is what makes our blood red. We might imagine that the ancient Sumerians assigned Mars the rulership of iron because it created weaponry that befitted an archetypal landscape of war; but it is a mystery how they might have linked this to the red in our blood. And it is certainly a mystery, it can’t just be a 3500 year-old lucky guess, that we discovered the red planet of Mars not to be “fiery” but frozen and only red-colored due to it being rusted with iron. Such mysteries don’t weird me out. They are just part of a larger cosmic joke on us: That the Zodiac and astrology aren’t just some pretty pictures made for our amusement, they contain secrets encoded from the origins of existence, at least the (super-)human kind.

Speaking of superhumans, Superman is one of the modern archetypes of Aries. (We will talk about Ironman another time.) In a recent post celebrating the birthday of Aries Warren Beatty, someone quoted Carly Simon’s recounting her love affair with that womanizing Hollywood god. She termed him a Superman in the sack, which I don’t doubt. He is known to have had a habitually hard-on, bedding a number of women in any given night, and known to have thousands of female conquests, many of them the most famous leading ladies in Tinseltown. This could only describe an Aries man. He is indefatigable in this regard. The same was said of (and by) Aries Marlon Brando—that he couldn’t help spreading his seed everywhere, all the time. That he was eternally unfaithful—while Shirley Maclaine said of her brother: “he couldn’t commit to dinner.” Cardinal-fire, that spark of life, right? Well what sparks life but the male-principled sperm. Before he was a wargod in the Hellenic pantheon, Ares was a male fertility god, the proverbial horned one—the Ram’s antlers are not just his warring weapon, they will determine dominance which translates as the right to reproduce with the female population. Aries men, like their archetypal godhead, wear the mantle of assumption that they are the alpha, and comport themselves as such. But remember people of a certain sign are simply the best representation, example, personification we have of that sign’s archetypal energy, which lives in all of us.

Aries is the natural ruler of the first astrological house, whose motto is I am. The first house not only rules the physical body but embodiment (of the cardinal-fire that burns within all of us). What I’m trying to say is that: When it comes to who you are, akin to what you want(ed) to be (when you grew up), this is where we need that self-evident, alpha energy. Mars and Athena’s station as war gods isn’t just about competition, it’s about winning hands down, stopping at nothing to achieve the campaign of being yourself. The second we second-guess or make apologies or compromises or but (our own inner) baby in a box, we are already setting ourselves up to lose. We don’t have to warriors in all aspects of life, but we mustn’t be anything but when it comes to the battle for selfhood.

A Light That Never Goes Out