Art of the Heal

So after making a break and going AWOL from societal tradition, as we did via yesterday’s symbol, we fittingly find that, today, at 4° Aquarius, A Hindu Yogi Demonstrates His Healing Powers. Again, how Aquarius is thus? Think of those disenfranchised “dawning of the Age of Aquarius” youths who let their conventional military buzzcuts grow out and followed the Beatles, like so many Mia Farrows, a Waterbearer, east to India in search of something more meaningful than what was on offer in the west. (I also gently remind my several readers that the Sabian Symbols were assigned out of order, the clairvoyant who divined them didn’t know which day of the calendar she was channeling, so it’s extra fun and magical and mystical when we see inherent, intellgent and elegant logic in their roll-out.)

The keynote of this oracle, according to scholar Dane Rudhyar is: The disciplined use of spiritual energies in restoring the natural harmony disturbed by man’s inharmonic attempts to transcend nature through the mind. Word. And let me tell you this couldn’t be any more spot on given the rulership, by Cancer, of this symbol, in a twelve fold sequence. The previous sign of Gemini’s motto is “I think” and, though it’s a good thing to do, your mind isn’t always your friend. As such Cancer, “I feel” and its rule of the astrological 4th house is all about hope and recovery and healing. When used as a lense, say, for the unfolding of biblical legend, the buzzy, mutable-air Gemini is about the Fall (the Twins symbol duality matching the apple of the tree of the knowledge of good and evil, again duality), which provided Adam and Eve with “consciousness”, thinking seeing them cast out into the wilderness wherein the human story became increasingly fraught until the Flood. Air signs like Gemini are mental (as can people of the sign be); whilst water signs like Cancer are more emotional—we must get out of heads and into our feelings if we are going to achieve any kind of emotional healing or recovery. Noah’s being a drunk hits home the metaphoric nature of the flood, a rise of emotion, wiping out all the sick, addicted, mind-based thinking and allowing us to make it to another shore, that of recovery and deliverance from the perversion of our minds. Mercury, which rules Gemini is a trickster, as is our brain which will rationalize our actions and deny our own shortcomings and dis-ease. Cancer, ruled by the Moon, is about feelings which never lie, they are instinctual, inherent, intuitive and inalienable and in honoring them, over the workings of our mind, we might be at sea for awhile before we land and find new footing.

Yesterday we saw a sailor desert. He broke away from the strict mindset, the brainwashing, the bondage of his situation, trusting his feelings which send him AWOL. He realized that he couldn’t do the same things his mind told him to do, day in and day out, and expect to feel differently or freed from said bondage. He had to make a break for it, and so he did. And now we see this Hindu Yogi, this master, who shows us how to return to our true spiritual nature—emotions are the gateway to spirituality—to regain a sense of harmony with nature, and all existence, the universe, by transcending what the confounding, cunning, imperfect mind has to say, and what trouble it can get a person into. We are all the yogi and we’ve all got boo-boos (sorry, it was right there). Society overemphasizes the power of the mind and/or those who are really running the show (from behind that curtain we spoke about several days ago) know that our minds are the most malleable part of us. So society is all set up to manipulate our grey matter. Hello advertising. Ironically “civilization” tells us that we must use our minds to transcend our biological drives and desires which is a total recipe for disaster. It doesn’t work that way. We have to accept our biological drives and natures. 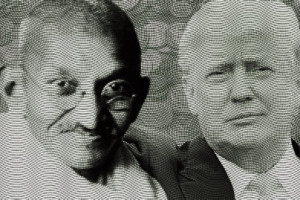 The true goal is to free our minds from such manipulation and, yes, come together, but not under some mass mind control like the poor enlisted sailor; but rather as self-motivated individuals freely associating with one another according to harmonic rules—unity with not control over others—and, to coin a phrase, let the healing begin. The world society we live in is, in many ways, a parody of civilization. Our processes of indivdualization have mainly separated us from one another, setting up heirarchies, which are all illusion—nobody is better or more than anyone else; we were indeed created equal and we remain that way, separate, different but equal. The sense that I am better than you because I have more money, or even that you’re better than me because you’re not materially minded is all, again, an illusion. There is no better. And these means of defining ourselves in shadowy versions of individuality only adds to the suffering and keeps our giant ship of fools perpetually at sea.

We all have a separate spiritual duty to heal ourselves, the taking of ultimate personal responsibility, and to ascend to our own highest power, safe in the knowledge that we can never be more or less than anybody else. We don’t Trump anyone. Of course that self-named not-politcian is a Gemini master of mind manipulation, a Mercury ruled author and Art[ist] of the Deal, who, Stella told me just the other day, went on record a decade ago saying (and I paraphrase) that if he ever ran for president he would do so as a Republican because the base of that party is so stupid that it would be so easy to tell them what they want to hear and convince them to elect him. Machiavelli? Also a Gemini. People of a particular sign are often the most vivid example we have of the energy of that sign, personified as it is, as a walking-talking illustration. I would venture to say that his goal is to rule over other people for personal, material gain. Sadly, he’s not in the minority. Maybe his definition of gain is money. Maybe Hillary Clinton’s definition of gain is pride. Maybe Barrack Obama’s defnition of gain was respect. All in all, it’s still personal gain. Who, in the attitude (if not mind) of the yogi would run for president; one might say that Gandhi’s leadership of India was more a less a byproduct of his lifelong work to free his people through pacifistic means. He didn’t exactly campaign.

If we heal ourselves, you see, then we can heal others. We climbed to the Capricorn mountain so that we could achieve this certain Aquarian enlightment and then bring it—like the water bearer John the Baptist, to the people—”Hey, I’ve got good news!” But in so doing most of us do tend to lose our head, right? Metaphorically speaking isn’t that what we aiming to do? Free ourselves from the workings of the mind and live in true spirit of compassion which is the daugther of diviersity. [All I did there was invert a Starsky + Cox saying: Diversity is the Mother of Compassion, as Aquarius will give way to Pisces, which is all about the Love. But we’ll get there. We’ll get there, thematically, in this Blague in the next two months; and we will hopefully, all get there, individually, in this lifetime, which means the human race, as a whole, would get there all together and evolve the entire being of our world, in which we are organs and instruments of that could-be enlightenment. Namaste, bitches.

Sword From The Stone