As Above So Below

The Mother force of nature meets the social togetherness you’ve come to expect from a Libran oracle, starring in today’s Sabian Symbol: A Sunday Crowd Enjoying The Beach. The watery Mother source is revivifying; we know that the ociean is a “vast matrix” from which living organisms first emerged—it also symbolizes the collective unconscious, the matricial field in which consciousness takes hold. Here nature meets nurture, given the fact that our individual human consciousness is indeed molded by the culture in which we live, and, by one another. And so it is extra invigorating and healthful for a chunk of that culture to gather all together at the source of our ancient originality, the Mother, who is limitless and uncontrollable. This oracle is ruled by Sagittarius in a twelve-fold sequence.

Sagittarius is ruled by expansive planet Jupiter. The mythological figures of Jupiter (Zeus) and his wife Juno (Hera) preside over the sign in an archetypal complex with Dionysus whos own mother, Semele (meaning: she knows), was burned to bits by Hera who appeared to Semele in her full radiance which is blinding at the least (nod to the Tiresias myth) and downright scorching—the astrological Juno symbol is sort of an asterisk on a stick pointing to her radiating in all directions. Semele was pregant with Dionysus at the time, I should add, and Zeus/Jupiter rescued the fetus and sowed it up inside his thigh from whence he was ultimately born. Dionysus is called the twice born, and the thigh is the body part associated with the sign of Sagittarius. Crazy how it all fits together, right? Well what is interesting about Dionysus is that he becomes the only son of Zeus whom that chief god doesn’t fear usurping him; in fact, one senses, he would condone and champion that succession, unlike that of other sons like Mars/Ares, Apollo, Hermes/Mercury (who remains his adolescent messenger) or Vulcan/Hephaestus, whom he made lame.

Dionysus is a culture god (of wine) forever trailed by a company, a retinue, of party animals (some are actually animals). He is Nature personifed as male, you see, something that was unusual in the late-breaking pantheon into which he was introduced as the thirteenth god of Olympus where there are only twelve thrones—Hestia, goddess of the hearth, abdicated hers in his favor, and of her own volition, open seeing him for the first time. Nature as male. The combination of the man-made world of culture and the natural world which, for the most part, has been mainly represented by female. This blending of opposites—it mirrors the Tierisias myth, Tierisias having lived at various time as male and female. The whole of the human race, with its ideas and dominant spirit, rings of a male, conquering energy; while nature remains Mother, female. And in this image we see the one principle returning to be renewed by the latter, like a goddess taking a literally rejuvenating bath in ritual of eternal youth. 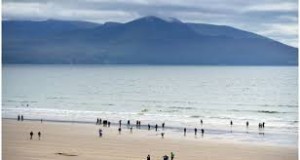 The biggest mama in mythology is Gaia, (embodied by the Earth), who is married to Uranus, the universe (though of course he is namesake of a planet which is nonetheless associated with universality). We see reflected in the watery see, the vast sky and universe of galactic space which, too, is Gaia. Starting with the Milky Way, a nod to the nourishment afforded us by the mother in space. So what is the point of all this? As above so below. The way we view the mother source as an ocean, is the same way we shall come to view the great sea of space for one is mirrored in the other. The infinite breadth of subject source and divine mother love will continue to envelop us no matter how far our objective minds take us. We will always be withinside her realm. And she knows. She knows.

Do It All The Time