Cock A Doodle Do

I just knew today’s image was going to feel special, because I am experiencing such a sense of rebirth it’s unreal. Chanticleer’s Voice Heralds Sunrise is the Sabian Symbol for 23° Libra. I had to look up Chanticleer and so an unexpected synchronicity. I awoke in Switzerland yesterday. It was very windy along lake Geneva and the birds are migrating, to Africa I suppose, in large swaths of winged sky. I thought, as the cat—we were cat sitting somewhat—dragged in a mouse at 3am that I hoped it wasn’t a bird. I thought no because birds roost at night. Then I thought of the word rooster for a male chicken and couldn’t make the link. (Yesterday’s symbol was about birds); and Chanticleer is apparently the proper name of the rooster character in fables about Reynard the Fox, which is related in the Nun-Priest’s Tale in Chaucer’s Canterbury tales. When I was in fourth grade and first learned French and all about Charlemagne and the earliest history of that realm, which led to my studying medieval French literature and university and ultimately studying abroad in France, I wanted to change my name to Reynard. Yes, at ten years old, I imagined I would grow up to be a mercurial auburn haired fellow with a pointy beard and moustache and I thought Reynard would be a fitting name for that character version of myself.

The cock that crows as the first coloring of dawn appears at the eastern horizon is a beautiful symbol of the ability, demonstrated by all pioneers and cosmically attuned individuals, to give voice to what is as yet unmanifested, but is on the way to manifestation. At the ego level, chanticleer may feel that he makes the sun rise; but someday he will learn through painful experiences that to create is only to reveal what essentially is. It is the vivid recognition of the as-yet-unknown in the known. 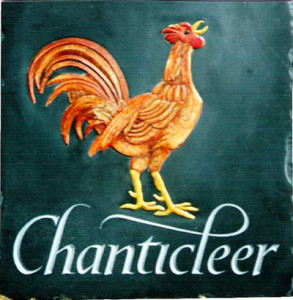 I hope you all read that a dozen times. We arrived yesterday afternoon in Grenoble where we met on our study abroad program, exactly thirty-two years ago this month. As we drove from Lake Geneva, down, through Annecy, and arrived in this Alpine city, the gateway to the south, where we go today, I had butterflies like crazy. I was expecting to find a dreary, dull town, worse off than when I left it, with little interest but vague nostalgia, but I discovered the opposite: a culturally rich and beautiful little city along a river, that used to be neon green with industrial chemicals, now clean and pure, it’s ancient fish returned. I know this because my “french family” told me. When I was nineteen here I lived with a young couple, Gérard, who was 30 and Christine who was twenty-eight and their two and a half year old boy, Laurent. On this study-abroad program, as I said, I met Stella-Lynne. On the last night in Grenoble we baby sat Laurent so that Gérard et Christine could go out (for once) and they did, all night. We had a train first thing the next morning and Laurent kept us up all night. I had to mimic his father’s voice to keep him in line but I thought of that trick to late. No sleep. Gérard was fresh as a daisy at four a.m. when they came home and by five he was driving us to the train station. “Dites pas au revoir,” he said, “mais à bientôt.” Okay, so thirty-two years later I arranged with Laurent to suprise him and Christine, and we met at a restaurant last evening near our hotel and didn’t take a single ussie because we forgot, no, we, didn’t think of it because it was a genuine experience.

As I write this Stella’s iphone alarm is “ringing” with Nina Simone singing “Here Comes The Sun.” Read Dane Rudhyar’s words one more time because there can be no better summation of the key to today’s symbol and I would fail if I tried to top that. All I can say is what I kept saying yesterday as I walked along the Isère and through Grenobles winding ancient streets: “I feel reborn. I feel like this is a new beginning. I feel alive. I feel revitalized. I feel like this is a fresh start. I feel like a giant thread has been woven back through the most essential fabric of my being and I’m no longer holding onto some mythic past because my present is suffused with all that is essential and relevant about it. I am filled with love and hope and renewal. I am the fox. I am the rooster. I am the dawn.