Do You Hear What I Hear?

You’ve heard me mention that the sign of Scorpio goes beyond Libra concept of “union” (Venus) to that of “merger” (Mars-Pluto). The sign rules sleep, sex, death (all falling under the notion of regeneration—the eighth sign of the zodiac is a nod to the 8-shaped lemniscate, a symbol of infinity—death, like sleep and sex, not signalling an end but a new beginning–good news, right?) In sleep we merge with our subconscious, if not a collective one; in sex we merge with another being; in death we merge with the All. Over the past three symbols we have seen how the surrender of the ego, an obstacle to be removed, allows for communion with the all-creative divine. So it might seem at first like a let down that today’s symbol at Scorpio 19° is A Parrot Repeats The Conversation He Has Overheard. And yet, there is deep meaning here. If we are an open channel through which the divine might give voice then we are, all of us, as creatives, repeating what we’ve heard. How many times have you heard an artists say of their best work that it seemed to come through them? In the best sense, we would all seek to be the parrot automatically channeling what we, too, have “heard”. Angels we have heard on high.

When we make such a connection, “Uhura, open a channel,” we become a conduit for transmission. Now the first thing we think of is that the information is flowing from the divine (within or on high) through us into the seen world. Remember Scorpio rules the unseen. But maybe this is a two way street? The notion that we beings embody the consciousness through which the Universe might perceive itself? Ah. Now that just sounds a bit spooky doesn’t it. For we just then seem like upward-standing moveable hairs, sensors, on one little planet, feelers via which a blind inner unseen and unseeing universe might have some notion of itself. Makes you feel almost a bit used, doesn’t it. And yet it connotes that we are not separate from the Universe—and, really how can we be. Grow up. Still, let’s go back to the one-way street notion of creativity working through us, information working through us, genius working through us, our being a means of transmission from the inside out. Could it be that we possess this power of channelship? I know my answer to that. Could it be that people who, in their astrological charts, have this particular degree of Scorpio accessessed or highlighted in this way, have more more potential in this area? I dunno, but I’m going to keep on eye on that. Just as I’m going to keep an eye on all 360° of the zodiac and add this Sabian Symbol wisdom into my practice with clients.

I do believe we all have the capacity to transmit transcendental knowledge. And that the person who lives in a sustained state of Faith has more capacity than others. I do believe that there is knowledge and wisdom that transcends our normal, organic, brain capacity for understanding it. That’s why it’s called transcendental. Those who learn to still their minds surely have more capacity to hear the utterances of the All because, hello, they are listening. This is how superhuman realizations come to be. This is why DaVinci or Einstein could “come up” with things just be staring at a wall. Because they weren’t just staring. They were channeling, my people. Godz isn’t watching us from a distance—godz is watching through us from inside and yes godz is talking a mile a minute. [The invention of this new word godz to refer, lower-casedly, to the divine as both singular entity and plural pantheon just happened here] I believe the best poetry, especially, is channeled. Songs. Physics. Math. Chemistry. Comedy. Choreography. Invention. Philosophy. Puppet shows. All of it. The genius depends on how far out of the way you can get this divine expression happening through youz.

Can you shut the ef up and listen? On the other hand, I know, I have friends and colleagues and clients who feel they are too open a channel. My question to you is: Can you discriminate. Either way you have to allow, without fear, and in full Faith. There is nothing abnormal nor is there anything sinister in being an open channel. Fear of being too open is still anathema to Faith which you must go full into; there may be a glut of divine conversation you’re blocking and, at first, you may be flooded when you release into Faith. But soon that flood will become a flow, and sometimes a trickle—the trick is to express what you’re hearing as much as you can when those floodgates open. I know, I’ve been there. It can seem overwhelming, but you can literally work it out. And don’t be confused by what is the ego pretending its been surrendered acting like the divine voice. That is the real trickster. Just as the ego-mind would sometimes have you believe you are the source of true genius, it will also pretend to be the true divine source and that can be confusing. That means you need even sharper skills of discrimination. You truly do know when it is you are the means and when you are the end. When you are truly channeling higher intelligence(s), you might feel happily overwhelmed and unable to record all you’re “hearing”. When it is your ego pretending to be that higher voice, you will feel frustrated, forced, edgy, alone and maybe afraid. The one thing that a truly open channel will learn ya: You are not alone. 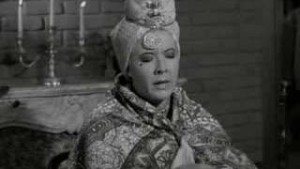