Today, at Scorpio 20° we see that A Woman Draws Away Two Dark Curtains Closing The Entrance To A Sacred Pathway. I know what’s going on here. This image would be ruled by Taurus in a twelve-fold sequence—as Scorpio’s so-called opposite sign they have much in common, the former sign ruling the throat and neck which, holistically, correlate with one’s nether regions, the former’s motto being I have and the latter’s, Scorpio’s, being We have, material possession and psychic possession being their respective keynotes. Having removed egocentricism from our psyches, we perceive a morality, indeed an existence, beyond duality. We are we. We have always been we. One with each other, environment, the universe. All is vibration and we are One with the All. Faith is the woman within, “rooted in the deepest intutions of the soul” (Dane Rudhyar). Fear is anathema to the true mystic’s life which, beyond Libran union, is based on Scorpion unity. The sign rules the occult, which really only means what is hidden from us. Here we are again, in the unseen world; and metaphorically speaking, it is entered into through the cosmic female’s woo-woo. Surely we are in the territory of the Eleusian Mysteries which entail a ritual dying of oneself. Our Taurus friend Andre Gregory in My Dinner With Andre, describes this ritual happening (in the Hamptons no less) whilst he also explores the imagery, meaning and archetype of the Minotaur. (We told him: You can’t escape your archetype, Andre!)

Ah but the courage it takes to step into the darkness. I remember, nigh on my confirmation into the Catholic Church, how we and fellow initiates were whisked away for a day (or overnight?) to some Catholic retreat place—there’s a name for these places you often see on hills as you whizz by on a highway, but I can’t remember what they’re called. Anyway, I remember being led, blindfolded, through the darkness of this place’s basement along with other sweaty adolescents full of trepidation and utter boredom; and I suppose it must be a vestige left over from some pre-christian original Eleusian ritual; although, even if I had there wherewithall, I doubt the robed Franciscan brothers guiding me through the gauntlet would have appreciated my interpretation that we were inside the great mother goddesses’ mystical box. Something tells me, however, that, if I could go back in time, my saying so to Brother Whosit would inspire just the right kind of fear that might have been associated with the once ritual death and rebirth ritual of the Elusians. Because really, that’s what we are talking about here.

When it comes to actual sex one might say a man can find rebirth and regeneration in the offspring he might find conceived by that great, receptive female. Metaphorically, the true mystic comes to realize, in facing death, that it is only fear that is killed and that he is reborn as a new self that is fully unified with the power of the divine feminine, “the woman within.” Now we may all know many a man whose woman within has been without much of the time; but we aren’t talking about any other form of transformation (another key Scorpion world) that which is had by the endowment of spiritual, mystical power. We can entertain the notion of transcending death; but can we live the concept fully. Can we understand that we are going to be here for all time; and that means all of our actions, and even our thoughts, will constantly, ultimately catch up with us. The Libra, with her Scales, weighs the consciousness of each of us, the emblem of what is Karmic law; but Scorpio delivers the verdict—it is Persephone who decides your Fate based on the life you lived. You make your own heaven or hell. And you’re going to have to live with it for the rest of eternity. So go ahead, make your next move. The spider is watching and waiting.

Postscript: You have heard us say the Scarlett O’Hara is a personification of all things Scorpio Female. And you do remember out of which she made her velvet gown? Yeah. 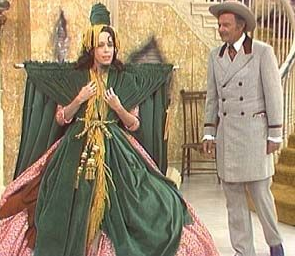 I saw it in the wind-a, and I just had to have it.

Do You Hear What I Hear?