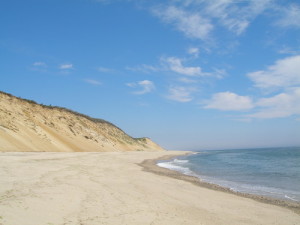 The landscape of my daily constitutionals.

We all have sadness and have experiened lost, but some people are better at grieving than others. I am not one of those people. Dating back, I always felt kind of ripped away. We moved to the suburbs from Jersey City in 1972; and then I was happy to ripped away. Though we weren’t your typical suburban family, I assimilated best of all—my father and sibling had the hardest time—my mother, the Pisces, dissolving in anywhere. But we were ripped away each summer to the Jersey Shore. I didn’t complain about this, but having summer friends and year-round friends made it difficult to bond really full with people and get any sort of consistency or momentum going. And as I was graduating high school my parents sold the house in Wyckoff, so I never returned there during college (except for once, in the first weeks of school, when I and a band of friends from B.U. stayed there and went to see Simon & Garfunkel in Central Park, on a whim, driving overnight and landing, near Wyckoff’s border, where the car literally broke—it’s frame cracked—anyway that’s a story in itself.

Instead I returned “home” to our summer house which was now our year-round house, trying to keep Wyckoff friendships alive but to no real avail. So I committed to a social life I could come home to on the Jersey Shore. I worked at the Parker House in Sea Girt and tried to cobble together a cool social circle. It worked but briefly; and not too many years later that house was pulled out from under me. And I suppose I repeated this trauma in my adulthood, moving from places I loved just like I gave away designer furniture I loved—George Nelson and Eames and other great pieces at least to great charities like Housing Works.

But I think I’m ready for a new era of ownership and stability as I get to this juncture in life. By the same token I could run away and join the circus (which is code for move to Los Angeles to become a character actor). The thing is, curse of the Libra, I am always intrigued by new possibilities and am never so sure as others seem to be about places of habitation and career directions. I can do what I do from anywhere, pretty much; which is a wonderful thing. And the word retire was never in my vocabulary, even dating back to when I was younger: I always knew I’d do something for a living that allowed me ultimate decision power. Ironic isn’t it that someone with difficultly making decisions has at least decided that he wouldn’t outsource decision making power. Maybe it’s enough to embrace this power, and forget about how I wield it. I wield it. That might be more than enough.

The moon transits Jupiter in Scorpio today so emotions can be intense for sure; but as they trine Neptune in Pisces the intensity should be allowed to dissipate just as readily. Today is a pivot, this much I feel. And though there is a ton on my plate I must flow with all of it. Producing a show this week at the Americn Repertory in Cambridge, continuing to write new introductions for next year’s Haute Astrology books, sign-off on a final draft of a business plan (and get my brain around what comes next on that score); I do need to start work on the new books themselves; I must finishing casting next year’s series ad A.R.T. and also this year’s Afterglow, not to mention beginning the outreach to fund it. There is more; but these are the major balls in the air.

The other elephant in the room is, well me. I was going to write the diet I must now began in increasing earnest and intensity, but I could resist. It’s spring and i need to drop at least ten lbs., which, to be honest, I end up doing pretty much anyway starting this time or year through summer, even without trying. My reasons for a little crash aspect in the diet is strictly practical and also financial. I need to fit comfortably into clothes I already own for upcoming events this month and next in NYC. And so I’ll be frontloading diet and exercise above all other things these next few weeks, and then just let it become part of the new order. I have been making my very spicy drinks and broths and getting early to bed and early to rise plus not drinking any wine at all. I know longer plan these sorts of clear-outs really. As I say, they are an annual unspoken event of sorts.

Lunch today will be a glorious leftover black bean soup. When you wake up at 5:30 as we do, you tend to be ravenous by 11:30. Then again I always ate lunch early. I remember back in the day, specifically, when I worked for the Book-of-the-Month Club in the early 1990s, I would hop the number two train from, practically, underneath my building on 12th Street and zip up to 50th Street to the Time Life Building, in under ten minutes. If I packed a lunch I would inevitably eat it at my desk by 10:30 or 11AM and have to go out and get a second one around 1 or 2 PM. I know that they referred to this in The Lord of the Rings but I thought it was something made up by Tolkien.

Does it ever freak you out that you will die without reading all the books you want to? Now these are the thoughts that could keep my up at night. Ha. Who am I kidding? Nothing keeps me up at night.
To view the original Sabian Symbol themed 2015 Blague corresponding to this day: Flashback! The degree of the Sabian Symbol may be higher than the one listed here  as the symbols culminate in the next degree. There are 360  degrees spread over 365 days.

Now I Lay Me Down To Sleep