I love the way today’s oracle, A Well With Bucket And Rope Under The Shade of Majestic Trees makes me feel. Straight away I see Libra’s rule over this symbol in a twelve-fold circular cosmic wheel of the Zodiac rolling it’s way through all 360° of the year. (That means five times a year I don’t have to write my daily Blague.) Libra is the sign of outward appearance, high consciousness, order, balance, asthetics and so much more. The rather abstract god of order himself, Apollo, was a late edition to the pantheon, and is the main, classical male archetype of Libra, itself abstract, the Scales being the only inanimate sign. He is an oracular god, and oracular high-priestess goddesses portray the feminine archetype. Ordered trees and columns are part of the aesthetic and ideological landscape of Libra—Apollo’s most famous myth of he and the nymph Daphne sees her reinanimating into a tree, the laurel, a wreath of which the god wears as a sort of crown; these sprigs being synonymous with honor, another righteous ideological abstraction with its roots in the sign of Libra.

I don’t always succeed but I strive for my Libran archetype; sometimes being ordered, balanced, principled and, even, so highly conscious, isn’t as much fun as the alternative. We can’t all be like Libra Sting and do yoga and meditate between playing madrigals on a lute; sometimes we’ve got to let loose and let Dionysus. That said, there are great benefits to the clarity that is unrivaled in the Libran experience. Apollo is god of light, lest we forget; he slays the Python, a Chotonian image if there ever was one—he rules the world of glaring, righteous, if not angelic light—Libra is the s cardinal-air sign, which translates to light and all that means—enlightenment, theories and prophesy, ideas and ideals, principles, high precepts, goodness and righteousness. So why would Daphne rather be a tree than even date Apollo? It’s likely he’s just too much. I mean talk about having great expectations. Pip from Dickens’ tale of the same name, or even Linus (the name of Apollo’s orator son in mythology) waiting on that pumpkin, Libra has high standards, expectations and demands, as soaring as the straightest Doric column or collonade of trees. And what Libra do you know about whom you can’t with some frequency say: They’re too much?

But what of that well with its rope and bucket. Well, what it says to me is that when you are leading a well-ordered and righeous life you actually have clear access as well to unfathomable depths into which you can drop your mind, coming up with the most amazing realizations and self-fulfilling prophesies for the future. When Apollo first hit the mythological scene, goddesses ruled the realms of art and music as well as prophesy. With him they fell under masculine rule for the first time, and so the oracle at Delphi passed to him from the goddesses Themis and Phoebe, still forever interpreted by high priestesses and sybils and other fabulous white witch figures. Delphi is located at a Spring. The well water symbolizes intuition or divine communication, ere the twain shall meet. It ultimately speaks to the notion that our divinity is within, and we can tap into it. 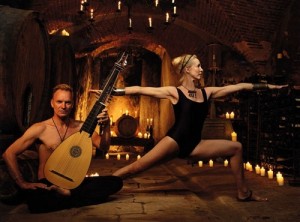 Sting and Trudie Styler, Apollo and High Priestess,
Both Libras

In that way, you see, the well water is the prime mover in the picture. It has created this beautifully ordered landscape. The outer world is beautiful and ordered in its natural transplendence signified by the trees. We can mimic nature and, in building our manmade world, comprised of our physical as well as ideological accomplishments, they can reflect natural order in civilized form. Art can imitate life. With a well of divinity within us, we can enlighten others and likewise be enlightened; in less lofty terms we can manifest high ideals that contribute to an ordered existence: equality, fairness, balance, justice, and just plain old goodness. Glinda is definitely a Libra, she even wears opague fleshy pink, the color associated with the sign. And what’s her message?: The power is within you. It was the whole time.

Yesterday we had to drill through rock to get at what we wanted. Today the well has already been dug. The move from Virgo to Libra ruled experience is always as that from function to design. Without the former you can’t have the latter. The well is filled with rain water, speaking to the relationship between earth (female) and sky (male). The rain is manna pouring down—a gift from the gods, Grace if you will, that, by way of our leading a personally and/or collectively ordered existence, can be properly collected within us as a resource, available to us, when we need it, especially for the purpose of further ordering our world along increasingly conscious, egalitarian, righteous ideals and, indeed, visions.