(Last year’s meditation on the Sabian Symbol for this degree:  click here) 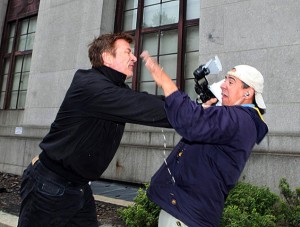 One of the bits we didn’t get to the other night in doing our Zodiac Club at Sid Gold’s was, to illustrate the point of the War God, Mars (namesake of the Aries’ ruling planet) whose Greek name, incidentally, is Ares, being the main archetype of the Aries Man. They can be hot heads (the body part ruled by the sign), brawling and downright belligerent. A list of head-butting Aries dudes includes Alec Baldwin, Russell Crowe, Sean Bean, Ryan O’Neal, Vincent Gallo, Gary Oldman, William Shatner, Dennis Quaid. Don’t even get me started on John Galliano.

Often, in the past, we stayed at our friend’s penthouse off University Place, next door to Alec Baldwin who we saw thousands of times. Typically, he’d be walking his ironically tiny dog—well not walking it just rather letting it do its thing—while ranting or howling into his iphone. We love Alec Baldwin. And Stella is really determined to ask him to allow her to give him a hug. She really thinks he’s one of our greatest actors (I agree) and a teddy bear (I’m not sure about that. I caution her against asking for said hug but if anyone could make him acquiesce to such a request, though he is notoriously on guard against having his privacy invaded, it would be her.

So on this trip we are staying in our favorite downtown hotel. The room is tiny but there is a great lounge and restaurant and we hang out in it all day and work and meet clients and take meetings and eat too many carbs and don’t always stick to sparkling water. Anyway, we were with a client yesterday and suddenly I heard this bellowing. I think you know where I’m going here. A red-faced Alec Baldwin has stormed up to the hostess stand where a placid slip of a young woman is seemingly meditating at her podium and he starts laying in. Something to the effect: Is anybody going to come to my table and wait on me or do I have to blah, blah, blah, blah, blah. It’s like he can’t help but come across, well, brusque would be kind. I honestly think she didn’t know who he was which is great and she was sweet and accommodating and of-coursing him to death which made him look (and I think feel) silly all of a sudden, like an anger-management audiotape was suddenly looping in his blood filled head.

The female archetype of Aries is the war-goddess Athena. She is prudent war, defensive war, more flight than fight, staying above the fray. Me thinks Mr. Baldwin needs to do some invoking of that steely-eyed deity who is the poster diva for picking your battles and channeling that feisty Mars energy into something sustainable rather than explosive. Aries men are pure energy, they really are. Unbridled fire and masculinity, Mars symbol being that masculine glyph that recalls the male genitalia—it’s on mens-room doors all around the world and was cast in gold(plate) and set on men’s chain necklaces set in chest hair framed by a velour v-neck for much of the 1970s. Male aggression. It comes from a very real place—below the belt.

Once You Get Started