I Am The Eggman

The sign of Aquarius, ruled by Uranus, is all about mutation as has been expressed here. Today, the oracle is A Child Is Seen Being Born Out Of An Egg, which points to the emergence of new mutations according to the great rhythms of the cosmos. As Dane Rudhyar, scholar of all things Sabian, has to say: the ancient symbol of the Cosmic Egg out of which a new universe may be born has resonance on many levels. We are being shown a new type of human who is free from the bounds of the past. He is the product of evolution, a mutant. Aren’t we all? He is born of the creative spirit that emanates from the cosmos, not from the ancestral past, as we saw in the Leo-ruled symbol. No, this symbol is ruled by Libra, the inanimate sign of abstraction. And as many a Libra person knows, they don’t feel quite like those who sired them. The legend of “the oaf” is associated with Libra. The oaf is an abstraction, not a real human baby, but a thing put in the cradle as a replacement for a real baby, usually stolen by witches. 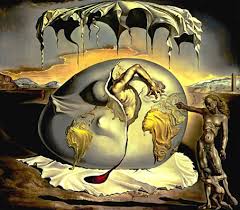 The air signs of Libra and Aquarius combine together to make something new and improved. The baby is born direct from the primordial soup of stardust, a child of the (air) cosmos, as opposed to a child flesh and blood earth babe. Here we see the signaling of a new age, and there are special powers of consciousness no doubt afforded to those with this astrological degree pinpointed by planetary placement in their chart. This is the mark of someone who owes nothing to the past, either by nature or nurture. Aquarius is a naturally detached sign, distant, a nod to its fixed-air assignation (like a distant star, opposite of the sign of Leo with it’s near Sun); Libra is etheric, cardinal-air energy, which translates to light, the speed of which, one believes, cannot be exceeded; it points to a certain order and perfection, it’s archetype being the god of light, Apollo. Now, that god, for all his power, was not beloved of god Zeus; just as Lucifer (light bringer) is not beloved of the Judeo-Christian god. Libras, for all their goodness, tend to be villified because they pose a challenge and fear of change via illumination. And light can be blinding and cast a dark shadow. (a note on the title: John Lennon is/was a Libra)