Okay, it’s the first full day of Aquarius; and what do we find? An Old Adobe Mission In California. Quite a turn from the hifalutin last thirty images of Aquarius. But of course that makes sense. With the end of Capricorn we hit our 300th image; and working in a twelve-fold sequence, it concluded with a (the last sign of) Pisces-ruled Capricorn symbol. So today, At Aquarius 1° we begin anew with Aries as the sequence ruler. Aries is all about birth and Aquarius (the Water Bearer, think John the Baptist) is all about re-birth. So what do we find: A simple bare-bones grass roots image that links the primal (symbolized by native American imagery) energy of Aries with that of the new (the good news of Aquarius symbolized by the mission).

The sign of Aquarius is associated with the “descending god/desses”; just as the previous sign of Capricorn draws on the ascending deities. The notion being that once we ascend and achieve a certain enlightment or deification it is our duty to return and uplift others. This is why Aquarius’ archetypes includ the goddess of the rainbow, Iris, who would basically sneak down to earth to give human folk divine 411, and the goddess of the Dawn, Eos and the prime one, herself, Hebe, the Water Bearer who poured out the nectar of eternal youth, keeping the other gods not only immortally alive but looking good in the process. And all of these female figures fell in love with mortals, again, a symbol of their love for humanity and their intent toward uplift-ment of others (not just ascension themselves). 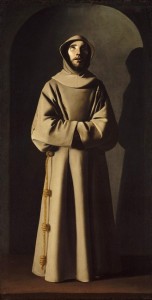 And so we find that the keynote of this symbol is: the power inherent in all great human works to endure far beyond the workers’ life spans. We are meant to sacrifice and consecrate our acts to future generation and evolution and upliftment, says this image. Like relatively modern-day John-the Baptists (a male Water Bearer icon) Spanish priests set up missions in California; a couple of hundred years later, we see just how much influence they had. They “saw” the future without surving into it. They made an indelible mark. As we move into the Aquarian symbols we start with a more spiritualized and idealist picture of social force at work for the masses. The elevent Aquarian house of Zodiac rules humanity, groups, organizations and humanity as a whole, mainly in the way the collective mind might be infiltrated.

The missionary starts with a vision which might not be fully realized in his lifetime but is in sacrifice and dedication to an increasingly large collective of people; in this case, converts. Of course there is something a bit patronizing in this: A so-called civilized individual (a man from the future: Aquarius) converting a primitive people (those in their primal state: Aries). The individual (priest) will be “immoratlized” via his sacrifice to the civilizing of the locals. Saint Diego, San Pedro, San Juan, San Francisco, on and on. California is still he model of the new world, even in the new world. It seems to be the final frontier and, let’s face it, every progressive as well as crackpot religion has taken hold there.