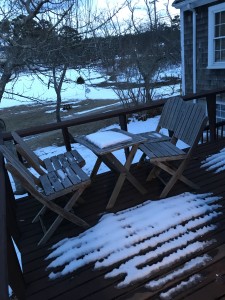 I’m lost in a binge of The Man in the High Castle. I know it’s not great (neither to be bingeing nor is the program all that), but there is something unavoidable about it that’s hard to explain. And I know that, before the ritualization I have planned for the Equinox, I might require this final form of escape. I think I really pushed my luck yesterday and I have to remember there are severe consequences for letting my guard slip. There is a certain vigilance that I must, by rights, live with and by every day of my existence. And it is something which, if I choose not to institutionalize it, must be personalized with persistent attention. It’s just too easy when not in the right frame of mind to make bad decisions and the added stresses of situations (albeit, again, of my choosing) can warp ones resolve and understanding.

I am grateful for the fortune but I cannot waste this grace. I think that is a promise I can make to myself. Confidence, after all is confiding in yourself. I just (again choose to) do so publically. I always want to qualify that by saying something akin to “but nobody here here really reading” but I’ve learned that’s not necessarily true and I have made the mistake of assuming anonymity and have gotten sloppy in not disguising certain people, places and things which might put noses (mostly those stuck up ) out of joint. Let’s just say we don’t need to give people excuses not to like us; because they will take it, making the symptom the cause, and lay all the blame for their dog-eat-doggedness upon. you if you let them. Don’t let them. Oh I also watched that HBO documentary on “the inventor” Elizabeth Holmes. And so I tweeted: Is it me or do you think that Elizabeth Holmes—see HBO’s “The Inventor” had a weird obsession with @MiraSorvino ‘s Romy character?? The voice, the hair, the black “business-woman’s” outfit??…and really is “I invented the Edison” that much different from “I invented Post-Its”??

Anyway I harkened back to this a-musing memory bliss today:

I love Julia Child. Who doesn’t, I know, but she has always held a special fascination for me. When I was a waiter in 1986 at the Harvest in Harvard Square, she and her husband Paul would come in for lunch. You would here “Bonjour Roger” in that booming unmistakeable tenor as she greeted the tiny alcoholic nicotine sodden  maitre d’ whose name she properly prounced in French, ro-jay. Paul, a curled shrimp of a man who had already suffered his series of small strokes, followed hist towering wife into the dining room where she would always order the same thing: a burger, rare, no bun. She is a Leo and I’ve often remarked on the similarity between her choice of lunch and the bloody meat one would throw into a lion cage.

Before the book and movies about her during the last decades, I always thought she would make a great subject for a work of art. I won’t go any further into that thought lest I actually end up pursuing this instinct myself. At the very least I think she and her husband would make great costumes for Stella and me, come Halloween. But, obviously, there’s more to it. Here was a couple who worked together (even though you didn’t know he was behind the scenes), who had no kids and were rather late bloomers. They were also obsessed with France and had an affinity for Cambridge, Massachusetts and Maine. All of this I can relate to.

She described herself “as the cat looking at the king” when she was a student of Le Cordon Bleu—what can be more Leo an expression than that. And what person from any other sign could turn what was for her a personal passion into an entire movement, changing the way Americans cooked, forever. What other sign could see a chef superstar embodied in the form of a fifties something woman. I’m happy I had the few opportunities I did to wait on Mrs. Child whose name couldn’t be more fitting for someone who lived life with a childlike exuberance and who gave so much to the world.

To view the original Sabian Symbol themed 2015 Blague corresponding to this day: Flashback! The degree of the Sabian Symbol may be higher than the one listed here  as the symbols cluminate in the next degree. There are 360  degrees spread over 365 days.