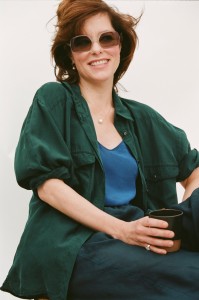 I binge watched Lost in Space, mainly to see our friend Parker Posey play Dr. Smith. It wasn’t great—in fact it bordered somewhat on Land of the Lost with a lot of running around and revisiting caves. But I haven’t binge-watched anything in about a year and the total zombieness of it all really felt great to give into I must say. I’m sorry world, but if you’re going to extend winter another month, and give me nothing but gray and rainy days, then I get to watch that much more television.

I am super excited about seeing the Harry Potter play opening on Broadway on Sunday. Fate has allowed us this as a perk for having a great thirty-two-year old friendship with so creative a talent and her kind and generous consort. Although events like this always make me wish I was thinner. But I yam what I yam. And the rest of the world will just have to get over it.

Speaking of television (as I was a few couple paragraphs ago), I’m really enjoying the Howards End on Starz. It’s fun to have a slower, more fleshed out version of what is surely one of my favorite stories (and films); there has never been so tragic a character as Leonard Bast, as I’ve probably said already in a recent Blague.

I just visited jkrowling.com and noticed she and S have the same paperweight which is designed, looks like, by someone who also used to be quite a close friend but who “turned” on us a couple of years back. I wish I could say I am over the hurt of that incident but the truth is I’m not. S is so much better and moving on than I am. But I am terribly sensitive when it comes to these sorts of things. One doesn’t expect sort of fourteen-year-old behavior from a fifty-five-year-old man; however, this man actually stated time and time again how he was a fourteen year old girl trapped in an adult male body. Now you’re thinking: So why do you care that you’re no longer friends. Good question.

I have never once in my life thought that I’d like to be famous, despite the fact that so many people I know are. I loved being an actor, which truly was a craft. I never thought I would make bank on it (which might be part of the problem). Anyway I didn’t have that kind of life. I had to work and scrimpt to get by. Also I never had the requisite confidence in the business of it all that I had on the actual stage. Who knows. It might all come back to me at some point. It would be nice to enjoy some kind of success at ths point as an actor and I do feel that I deserve that certain slice of happiness. Would be a challenge to go for that type of thing now but not impossible. Only for me it will need to fit a larger lifestyle.

People seem really torn about Lost in Space. They seem to either love it or hate it. Either way strong opinions are a desired effect and I hope the show runs a long time and makes Parker a lot of money.