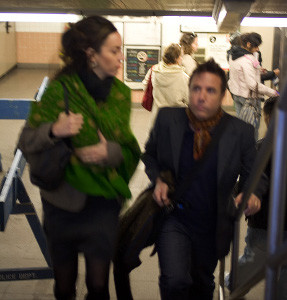 A show that answers the question how did you meet and come to do what you do.

Really it is about being within the construct of Time while coming to understand that all is one big “simultaneaity” happening in a cosmic instant which is exactly why it is that Quinn gets increasingly psychic and Stella, likewise, to borrow from the Baroness, “can see the future” in her own way. The trick is to just start picking stories from our individual and shared lives and plug them into a timeline until we find a string of stories that work as a show.

Starsky + Cox enter in darkness and station themselves stage right and left. A projection screen reads 1963, a warping, waved effect moves across it moving the image like a wind blows a flag or water ripples over a sign buried beneath it. A purposely blatant, if not bad, but kind of cool interpretive dance or pantomime begins, Starsky + Cox each go through their own pantomime of life experiences and pasage as the numbers tick forward stopping first on (possibly) 1973 (though it could be anywhere). A collage of sounds and music concide with each of their illustrative movements.

Some movements include being born, crying eating, making faces and noises, learning to walk, running away laughing, sitting on the toilet, taking baths, putting on school or Sunday clothes, learning at desks, kneeling at church, eating cookies, playing sports, learning dance, playing with dolls, doing cootie-catchers, being beaten up all things leading to age 10 if 1973 is the first number.

There can be dual monologues at this point or not. The interpretive pantomime can then become less innocent with sexual trespasses, more attempted sports or activities, trying drugs or alcohol, being teenaged stuff at the point the numbers reach 1981 Starsky + Cox can cross to each other, accept imaginary diplomas from one another, then walk off switching their tassle. More college type pantomime, more drugs, experience, learning, make up, music, dance The end point of this sequence will be 1983 when both sit down and we hear airplane sounds or the cabin crew doing a bit. The point is we are now on the plane to Paris both in window seats separated by a wide body.

The dialogue would begin by saying this is how we offically met but actually we were in this exact configuration before when the previous spring we went to see the English Beat, with REM opening, at Boston University, in a group organized by a mutual friend, though we were on opposites sides of the row in the auditorium and din’t actually meet. The character of the mutual friend plays a “role” in that ultimately he becomes a top plastic surgeon (whose job it is to remove wrinkles) he may make an “appearance” only in so far as he will be in Rome in Spring of 1984 when we meet the man who speaks in tongues.

Other stories would include the Harmonic Convergence, doing a Tony Randall impersonation that seemed to conjure him into being, maybe Graham Nash, taking liberties with truth and sequence, giving ourselves poetic license.