Snap Out Of It

I know I haven’t been writing very long posts recently . I suppose I’ve been channeling energy  elsewhere recently as Stella and I have penned a great new show called STARRING that will premier at Joe’s Pub at the Public Theater on the Solstice, June 21. I know Starsky + Cox fans are going to love it. Okay on to the image for today at 18° Gemini, oy: Two Chinese Men Converse In Their Native Tongue In An American City.

When this symbol was divined those two old Chinese men would have been immigrants, I imagine, in some corner of New York or San Francisco, struggling to survive. My, how things have changed. The original intention of this symbol was to portray the independence of ones mind in a foreign environment, which, now, let’s face it, is everywhere. All you need to do is wake up and walk out the door these days to be barraged by one-sided conversations, people talking into their phones or headsets, alienating us with their voices and insulated actions. We are all foreigners now, even, in our native lands. We mightn’t even interact with the barista but instead telegraph the fact that s/he is interrupting our call or disabling our ability to listen to the mystery person on the other end of the line. So many mystery persons. The voices in our head. I think I preferred a simpler time when only those experiencing a break with reality heard said voices. Now everyone is forcibly experiencing breaks with reality. We are affecting the behavior and attitude of psychotics.

Surely this is not what the mystics meant when they prescribed “being in the world but not of it”: All of us isolated from one another, tuning into whatever noise is coming through our gadgetry. Ah, that trickster god Mercury, the messenger and communicator, strikes again. He has waved his Caduceus wand over us and we are now all in a trance of noise and distraction. This is the new tower of Babel. We are not finding true solace in conversing one on one, face to face, with someone who speaks our language, the “old” Chinese language here signifying ancient knowledge and wisdom in contrast to the onslaught of random information that we experience nowadays. These men are finding a true connection, an oasis of familiarity and solace in desert of foreign superficiality. Of course, in 2015, if we were to see two Chinese men conversing in their old language they would probably be twenty-somethings, from a rich province, sanctioned to travel here, on a mission to purchase real estate—an image of conquest rather than survival. In some ways, we have become the ancient culture, steeped in our ways, and they are the surface dwellers of a new culture that has emerged from their socially capitalist, though still humanistically communist, regime. The worst of both worlds. 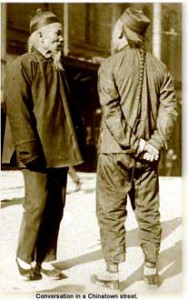 Cynical am I? Probably. And I will confess to a certain xenophobia as well, of which I’m not particularly proud. But it’s not based on any race or nationality, it’s not cultural—it’s political. And while we are all plugged in to our own distractions, things might be happening around us that are more determinant than meets the eye. History is replete with examples of quiet takeovers of lands and nations through the compounded purchase of real estate. Yes, folks, realtors are the real enemy, always. I jest. But Mercury is a jester. He provides what is meant to be amusing distraction while he is, with his slight of hand, sticking it to you. I’m not saying that we are going to be a conquered nation and Century 21 will be to blame. I’m just saying that in another twenty years, perhaps, this particular Sabian symbol is going to read a lot differently than it does even today. And we might be so caught up in our own sinister need to be engaged electronically around the clock to even notice.

In a twelve-fold sequence, this image would be associated with Virgo, which, like Gemini is traditionally ruled by planet Mercury. I say traditionally becuase there are those of us who feel that Virgo is really ruled by the as yet undiscovered planet Vulcan or the once-planet, Chiron, that was pummeled by asteroids. Doubt and disability, two key elements of the sign of Virgo. Doubt is akin to cynicism, which the skeptical Virgo energy uses to discern right from wrong, wheat from chaff, that Virgo virgin holding a sheaf of seeded grain. Decision making, reticence, being at a crossroads—the provenance of Mercury. Well I’m here to say that we are collectively at a crossroads and that this symbol, today might remind us of that. We see the clash of two cultures and it can breed integration or segregation. We are all now segregationists on an individual level. We only seek to connect with those who support our own culture of insanity. So long as you click Like or Join you’re part of my tribe. Don’t and who needs you. Wheat from chaff, wheat from chaff. Right and wrong is no longer a universal moral crux, its a personal assessment of worship. You like me so we’re good. You don’t like me so I will turn off your notifications or outright erase you.

Like the Chinese men in the image we find ourselves isolated and alone and alight on someone just like us with whom we can find connection. That’s not diversity. These are the seeds of a new homogeny. Their speaking with one another isn’t much different from anybody speaking into their headset. It’s further isolating, frankly. They might reach out and stumble over their words to speak to someone who isn’t just like them. That might be literally refreshing. But we are stagnating here. And that mutable-earth sign of Virgo has it’s own message for us: things are indeed changing on a monumental level but it might appear as slow as the moving of a mountain so you might scarcely know it. Every major political or cultural overthrow historically happened to a people who didn’t heed the signs. The signs right now are all those people you pass on the street or sit next to in cafés completely up their own electronic asses. At least in the past being oblivious to what’s happening around us wasn’t fueled by devices. Devices. You gotta love the multiple meanings of that word in this context. Oh, Mercury, you do have your devices.

Who Wrote The Book