A Watchdog Stands Guard, Protecting His Master And His Possessions is what awaits us at Aquarius 17°; just when we thought these Aquarian images were going to get all sorts of crunchy granola, we are finding them to be all business and gated-community-like. Admittedly, this symbol being ruled by the sign of Leo makes sense, as that sign is all about the establishment of ones castle and his keep and the autonomy one provides oneself and the protection one can then offer others. This is a symbol of backlash, I believe, showing the need to counterbalance the communal energy, not to mention property and living, associated with Aquarius. Leo is, afterall, the opposite sign of Aquarius. Something will have to be off limits and auntonomous, even if we are speaking metaphorically here. Nomatter how touchy-feely liberal we get we will still want to vouchsafe our privacy, no? Of course we come up against this time and again, both individually and societally. It’s a matter of the liberal versus the libertarian, both seeking to throw of the yoke of something, mainly, oppression by plutocratic and governmental forces, respectively, both of which fall under the heading of society—that old chestnut.

The purest communism the world has ever seen was, ironically, in America in the 1960s via, well, communes. But they, and communism in general, does not work. It seems that in trying to eschew totalitarianism it only flips around again. Remember the pigs in Orwells Animal Farm. I’m always struck by the fact that both Uranus and Saturn rule Aquarius, the planets of the avant and old guard. Though Uranus is the primary ruler, there is always that anchoring of Saturn—he’s like the watchdog in this image, or the big business man in the previous one. Why? Because Uranus’ energy alone is so radically ideological that it might not be effectual. It is arguably the Bernie Sanders of the Zodiac. Ohhh, grrr. Did you just say that. Yes I did dammit. I find Trump and Sanders (not to be confused with French and Saunders) to be so polarized as to be parodoxically the same in that they are preaching to audiences who want to hear the words they utter; while neither of the two have actual plans to execute what they propose. The right doesn’t want the Bern to take their toys away; and the left doesn’t want the Trump to screw them out of their due either. And so we need a watchdog either way you see. 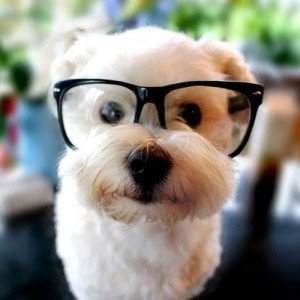 Okay let’s go deeper; because Dane Rudhyar has more to say on this subject in that he sees an occult reading of this symbol as well. Cool, right? You’re down for some occult action, yeah? Me too: The watchdog is thus in place to keep out any psychic intrusions or even those of dark magic. Now, as we journey toward this end of the Zodiac, in case you haven’t noticed, we are dealing with more non-material and etheric forces on a grand scale, whether it be personal revelation or a whole upper-case Book of them. So as we wax more supernatural we need that much more protection. The Rudh (that’s my new nickname for him)….the Rudh speaks of subhuman entities or “elementals” that the adept employs to protect him as ventures furter out into inner space—”far out” is such an Aquarian expression—but this just makes me think of creepy o’l Dr. Faustus, although he was courting actual demons. Elementals. Okay. I think we mean more like genies and spirits of fires and wee beings that Shakespeare would have loved to entertain. The Rudh likens these beings to guardian angels but, jeez, I dunno if I would call Clarence an elemental per se. (If you don’t know who Clarence is we have nothing further to discuss.)

Whatever the metaphysical level this oracle exists on, we are seeing a need for protection and security so that we might be able to exact an agenda that, hopefully, is beneficial to others. Any dimestore new-agey buddh-ish has heard the phrase “I dedicate my actions to the benefit of all sentient beings”—oh, it was a phrase that used to get thrown around a lot trust me. Anywig, sometimes it might be easier to do the right thing when you know you’ve got your own literal or figurative fido watching the door. I mean, the greater the adept or even the creative the more protection they might require. I know some very famous friends that learned that lesson the hard way. Then of course, Madonna has body guards, too, and she doesn’t do much for me or really anybody I know. But I don’t know that many people.