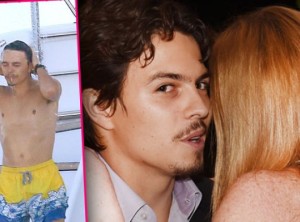 My dreamscape last night was crazy. I had this male lover or something, with whom I hadn’t been intimate (so I don’t really know what to call him) but he was young and sort of trade-ish and we either met at some resort or he was writing me, oh yes, that’s it: I received a letter from this fellow who had more than a friendly attachment to me, the premise being that he and I had already spent time together, though it wasn’t sexual by nature (it never is in my dreams); however I had the distinct feeling from that letter—I believe he mentioned coming to see me, or I was somehow going to be seeing him, coincidentally where he worked, at this resort from which he was writing me. I remember looking at the map and seeing he wasn’t that far from St. Tropez—I have a very dear friend who lives not far from St. Tropez either; and as I type this I do feel a longing to return to that part of the world. There was nothing incriminating in the letter—I passed it to Stella to read; and I think I said to her, at least with my eyes, that I thought the letter was infused with anticipation. I felt she agreed. We were going to keep a watchful eye.

The dream was so bizarre and included some recurring elements like: Stell and I were walking on Twelfth Street, from Seventh Avenue, toward Greenwich. There was a song one had to sing, a little ditty, that was like the opposite of an open sesame, upon leaving the subway station, as if to ritualize the passage. Anyway, I found I still had my key to the front door; and Stella ran a bit of interference keeping lookout while I put the key in. It was thin, like a pin (hey no cracks) and yet eventually went in and turned and we were in our old lobby. We pushed for the elevator, and more people came in, and we were waiting all together; keeping an eye to make sure the super John or Kevin (as he was called in the dream) would show his face. I think I confused this so-called Kevin, based on the real life, last super we had there whose name tramautically escapes me, with short-lived super called Frances whom I really liked. Anyway, we got up stairs and down the hall and, I believe, into the apartment. But, truly, as this is a so-often-recurring dream, I’m not sure if the rest of it is a remembrance of last night or a previous night in the past. But I think because I fell asleep watching the film of The Odd Couple, with that eight room Upper West Side apartment, with the moldings, so exactly like those in our two room West Village apartment, the hair-trigger I’m on for being launched back into this dream landscape was pulled and so there I was. It was in more disarray than usual which makes me suspect I did dream about it last night, triggered by Oscar Madison’s messiness.

I am a Felix, after all. I have the same afflictions: the clogged Eustatian tubes, the bursitis in the shoulder, the rampant need to clean, cook, shop, tidy, time and measure everything.

The dream went from the inner landscape of my old West Village apartment to this place, I’ll say Europe, where this resort spot on the map from whence this younger ardent fellow wrote me was a short hop skip and a jump. I was already on the beach and then on the water. Swimming, in small boats and so forth. A friend was swimming along the coastline and he was too far out beyond the breakers. Seals as big as sealions were riding waves, smaller ones, babies, “sitting” on their parents who were stretched out like surfboards. It was cartoon comical, but there was something lurking; and then large sharks, or at least one, panels of slick grey and white running the length of its body, and it was munching on boats and I tried to signal my friend but he seemed to be okay and then I don’t have much that readily comes back to me.

Still, I always feel that the quality of the dream is as telling as the content. It was so very vivid.

The Youth Of America