At Virgo 4° the symbol is Bland And White Children Play Together Happily, the keynote of which is “the overcoming of socio-cultural prejudices. Unfortunately this image, divined in the 1920s, isn’t dated. There was the recent story about black children at a pool party in Texas being terrorized by police, all of which was caught on video. And to be honest, living in a very white world in summer on Cape Cod, where I produce a performance festival, I know very few black people and we have never presented a black performing artist in festival, for no lack of trying. But even our supposedly diverse world of “downtown artists” is pretty pale for the most part; and it’s something I can feel self-conscious about. But surely I’m not going fill some sort of quota; the times I’ve offered shows to artists of color have simply not worked out in their ability to perform. Still, it’s pretty shocking. And I’d be a liar, as would be anyone in my expanded social circle, if I said I inhabited a diverse community, race-wise, because I do not. 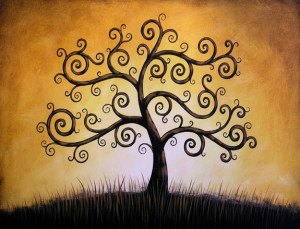 So that’s the reality that this image brings to bear. On the metaphoric level this oracle, ruled by Capricorn in a twelve-fold sequence, is about spiritual brother/sister-hood or fellowship. Outward forms along with cultural biases or class have no bearing on what connects those of us who might consider themselves on a spiritual path. The notion of some universal fellowship underscores all great spiritual schools that envision a great family of man. How this relates to Capricorn is in that sign’s cardinal-earth assignation of the mountain of which the goat is its natural inhabitant. The mountain symbolizes the pinacle of spiritual growth en route to receiving revelation—and there is room enough for everyone at the top of that mountain, room enough for all of us in a pantheon of divine humans. I believe a tree to also be a symbol of Capricorn’s cardinal-earth status; and all we humans are all indeed, quite literally, family; this is a scientific reality which cannot be disputed. The tree has many branches but it is all rooted in the same experience. We might do ourselves a service in simply picking some path or some school of spiritual teachings in the knowledge that connects to all other spiritual traditions and religions. Organized religion has indeed separated people who become locked in the dogmatic vehicle for channeling what should be a pure spirituality. The word re-lig-ion actually means to re-link. So anyone who subscribes to a particular religion should be free to do so but there must be the underlying understanding that all religions are linked into the one true great religion just as all wo/man, regardless of race, creed or color, are related by blood.