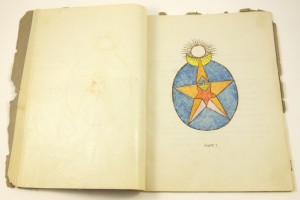 You really must read the previous Blague (if you haven’t) before you delve into this one because I am in some ways picking up here where I left off there; also there is a certain energetic set up, I feel, where no matter what I put down here today (and trust me I don’t know where this is going) I literally just wrote the previous one (ironically starting this new astrological year a little late) and so they might end up being, energetically, part of a piece. To be fair, as you’ll see from the previous entry, I had some thinking to do about how I got to the point of embarking on writing a fifth year of this daily Blague, including how I started the first year exploring the Sabian Symbols (the corresponding link to the first year Blague on the Sabian theme will be provided below, all year long). So today is really day two of year five of the Cosmic Blague, and the previous entry also tells you everything you need to know to understand what this thing is, has been, at various intervals, over the past four years, while I try to give focus to what this new year should bring.

I had one thought of reading ten previous Blagues a day which means I would nearly read a full year’s entries in about five weeks a year. This means that it would take about twenty weeks—five months— to catch up to where we are now, today, and then another fortnight to catch up in total. The reason for this being that: Comes a time when I have to have even a vague archival understanding of the body of text four-plus years can create; and to sort of earmark the many entries for various written purposes, heading into the future. There is a wealth of material (along with a lot of slog and drivel) accumulated now in this most Cosmic Blague. And I wouldn’t be (literally) getting the most out of it If weren’t to mind and mine it at some point. This next half a year seems as good a time as any and, here’s the rub, it should inspire the daily writing of the new Blagues moving forward. The gods help us all.

I have to work these things through you see (as little Edie as that might sound).

I remember back in the early 1980s I went to see a “Music and Lecture by Robert Fripp” at the Paradise on Comm. Ave. in Boston. He was already playing music when you walked in, electric guitar, and recording it. Then he would play back the recording and play over it and record that. I don’t know how many times he looped around adding layers, but surely several. I get it. I do want to write more material every day and yet it is so important to know what I’ve said before, what might be material for books, performance, lecture or entrepreneurial projects. I know I recorded near every thought. So it makes sense to take inventory of, and to react to and thread through the last four years for the riches and the ditches, if you will. I’m sure there are many stories upon which I can improve. And you’re likely not going to read every Blague so someone has to do it.

That said, I want get to this leg of the process for at least till the end of the month. Which was the goal: To finish up loose ends before month’s end. Then starting April 1, start this creative taking of stock, here, with the Blague, but also just, of myself, in general. At the same time, I will begin to institute some daily rituals and such in regard to promoting this pet project, something I’ve yet to do in all the last four years. Otherwise I’m drafting some books and casting some performance festivals and series and otherwise seeking to express my dual nature as thespian priest, blending performance with certain piety of a decidedly pagan variety. Promises, promises. That’s the trick you see: to creat the right kind of structure to inspire the output of your creativity, some scaffolding on which to build a real or metaphoric (as ere the twain shall meet) body of work. Tall orders always in my world; but something about me has to be towering.

To view the original Sabian Symbol themed 2015 Cosmic Blague corresponding to this day: Flashback! The degree pointof the Sabian Symbol will be one degree higher than the one listed for today. The Blague list the starting degree of for this day ( 0°,  for instance) while the Sabian number corresponds to the end point (1°) of that same 0°-1° period. There are 360  degrees spread over 365 or 6 days per year—so they near but not exactly correlate.