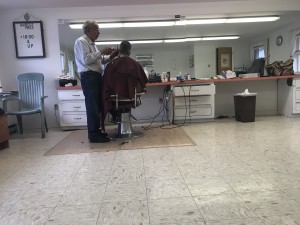 So I went to get my hair cut first thing in the morning which is the only way I can since my barber is open from 8-11 o’clock, only, five mornings a week. The early-bird crowd gets there at 7:45 or even 7:30 sometimes so they can be first in line—the haircutter extraordinaire takes his time—and the early-bird crowd is impatient and can get cranky and besides, like me, they’ve already been up for hours. As a tiny cosmic joke (French: blague) Neil Young’s Old Man was playing as I entered today, as I always do, with notebook or other would-be work in hand to keep me busy during the longer waits. Today there was just a guy in the chair and nobody waiting so it was an unusually speedy affair. I love this place, and the man in charge, and I leave at least a fifty percent tip each time which still means I pay twenty five dollars for a haircut that is the best I’ve ever had. Sometimes he gets phonecalls while I’m in the chair and speaks in an elegant Cuban Spanish to loved ones while looking at me apologetically in the mirror; but he never rushes off the phone either. Time is not this man’s master. And if he has no clients by ten o’clock he is out of there, in the warmer months, heading to the beach to go fishing, presumably for dinner. I have often fantasized about secretly getting a barber’s license and then spending time here sweeping up for free, trying to get my biorhythms to align with his so that when I am in my (I think late) eighties, I might have a steady cash income and every afternoon off to, well, probably not fish but who knows…maybe.

One of the aims of this daily Blague is to illuminate the extraordinary in the ordinary. (When people say life is boring or banal I wonder to what they are comparing it.) It’s all about perspective and surprising moments alone in places such as this with people such as the master barber, going at his signature pace, sweeping up himself between clients who are divided into two distincet categories: those like me who come prepared to work or make some notes or journal or meditate; and those who fidget and audibly sigh and moan or leave without a word. The times that has happened when I’m there, the master will shoot me a smiley look in the mirror as if to say “can you believe this guy” combined with “his loss” and “some people will never understand.” I understand. I love being here. We greet each other when I arrive. We shake hands when its time for me to take the chair. He never asks “so what do you want to do”, so if you don’t want to do the same thing he always does it’s on you to speak up. I can say I want something between a trim and a cut and for some reason that makes him laugh but not in a snarky way. Leon Russell, The Moody Blues, Journey and an otherwise mixed bag of “classic rock” will play on the radio (it used to be a current pop station with “funny” DJs and terribly overproduced current music with tons of trilling and no sustained notes) and I’m grateful for the solid musical choice. There are signs (zoom in on the photo) that tell you all you need to know for this or the next time, like “please come with clean hair.” Taped onto the counter in front of you, or rather diagonal to you—he keeps you at an agle—is his name written in magic marker onto brown craft paper that is taped down with the masking variety.

One time a chatty customer who was waiting while I was in the chair realized he might have been too verbose and apologized saying, “sorry I don’t want to distract you,” to which the master responded, “I can cut his hair with my eyes closed,” which sent a multiple message that I was a regular, that he was a pro (who could not be distracted) and, mostly, that he had an intimate relationship with my head with its double cow-licks and other idiosyncracies. Angled as one is forty-five degrees counter-clockwise from the mirror, one can sometimes stare out the window in a silent daze. Here there is no compulsion to talk, a rarity in this converted master-slave relationship; the experience is never lacking conversation for us; we like each other all the more because neither of us needs to fill the air with speak which, in this setting, is always so male-posturing and staccato. I will hear other clients ask pointy or rhetorical questions to which he will respond with polite economy. But we don’t need to pretend he and I. If I think about it it makes me laugh just how rough he can be. Maybe rough is the wrong word. Let’s just say he is completely unapologetic in the way that he pushes my head down or side to side, like a parent tiger keeping its young in a desired position, primally letting it be known who, exactly, is the boss in this relationship.

I had been going there for years before I remembered that my paternal grandfather, with to whom I had the most wafer-thin exposure (never mind anything resembling a relationship), was a barber. I remember getting my first haircut ever in his shop in downtown Jersey City in the 1960s, being plopped into the child’s “chair” which was a carved wooden horse of sorts, like a Medici version of the kind of plastic horsey you could ride outside the Food Fair by dropping a thin dime in the pay-mechanism, or the ones on springs you could jolt back and forth on at day camp or at some random park, some of them having lost their tension, causing you to flop too far to and fro and thus, undesirably, also, side to side. I don’t remember getting my hair cut at my grandfather’s shop more than once or twice because I didn’t; my tiny grandfather who was fresh off the boat from Calabria was immaculately tidy and wore a blue (I think) barber coat and had a back room—sort of an apartment really—where I’d rather play. (I have not thought of this since then, until now.) There was a narrow dark hallway leading back from the shop into a room that in my recollection was a sort of kitchen. I only found out this past year from a first cousin of mine, who is always the bearer of bad news, that it was something of a front and that the whole family were each, in their full- or part-time ways, bookies.

A world away, here, is this present operation. A formica and linoleum palace of blissful peace and silent understanding. The cape is unsnapped at the neck, the talcum scented brush does its usual thing, the large oblong hand mirror is stationed behind me with a smile that says I can’t say anything but “perfect(o)” or, preferably, probably, just nod while making the acceptable male version of a yummy sound. Today I said perfect with an almost Oprah affection. These thoughts of acceptability are in my own head. I could probably preen and pucker my lips in the mirror and say “oooh, fabulous” and he wouldn’t bat an eye. Instead his would smile at me as they do each time I enter and depart.