A Bun in the Coven 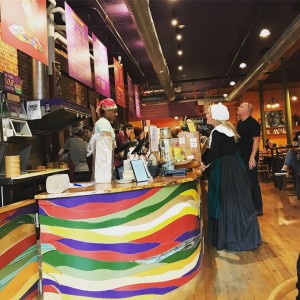 The topic is gluten a little bit to much for my taste today, but I smile and nod and agree we should try to back off it. I’ve been in this suburban land three days and now I must head to the North Shore as we have a meeting today at Endicott College. I worked a super good deal for a hotel we stayed in a year or so ago in Salem—the Merchant. It’s near the historic district and we love walking around and seeing the houses. It really is a best kept secret. As are some of the restaurants and surely the museum, which we’ll hit tomorrow morning. We tried to do something other than the obvious for lunch but realized we shouldn’t avoid it. So we went to Live Alive or whatever the place is called.

After buying some tarot cards and books at the Haus Witch we went for a number of strolls, taking breaks, back at the hotel in between, before setting off north to Beverly. It wasn’t very far at all. Something about the North Shore reminds me a bit of New Jersey and the area around Cannes at the same time. And the campus at Endicott was nice. We received a grant to produce a tour for Brian King and his band—of the show that premiered at Afterglow many moons ago. The meeting went well—the person at Endicott was really nice—and it was something quite unusual for me to do. I am not much of a visitor or outreach person despite the fact I produce and fundraise. That sounds ironic even to me.

The fact is I stay probably too much in my lane. In truth it’s all I have bandwidth to do. If anything I’m trying to figure out ways to limit multitasking while still hitting all my marks. I think I’m getting good at it. Anyway the conversation veered a bit and got a little cart before horse and by the end I felt like I was being tasked to do things I don’t want to do. Like share in Google chat. I share what I want when I want; but not in Google chat. I think what I learned today is that I am not only not a team player but I so don’t want to be. I felt a bit ambushed I must add, as the conversation was all about what we can do for the school, but I bided my time and let moments pass. Then, on leaving, Brian said something like I’m not sure we can do certain stuff with schools. (Which turned out to be true.) Now you tell me.

Anyway, S. was surprised that I wasn’t walking on air because on the surface the meeting seemed so positive, which it mostly was; but you know how certain people (Taurus people) assert their agenda through passivity, letting scenarios they’ve arranged play out, pretending guilelessness, well….I’m actually not sure Brian did this because he really does seem guileless and he is one of the kindest people I know. Still it’s sort of like letting other people hammer out whatever the issues might be. “I’m too important to be captured.” I wonder if anybody knows where that comes from. Well I’m not going to tell you.

Anyway, my mind was already arranging words into phrases to get the horse in front of the cart where it belong. But mainly I was thinking about food and wine (what else is new). We had plans to go to our favorite restaurant in Salem (and really the only one we know), this little Italian place (with a Serbian? chef…who used to work in Boston) called Firenze. The owner was in Seattle and it was a bit amateur night on the service; still we managed to find a decent wine and we had pastas for primi and a whole sea bass, kicking it old school. It was better than okay.

Our room was on the top floor of the hotel and was considered a suite; but it didn’t have any windows, just a skylite. But it had a giant soaking tub I was too tired to use until the morning.