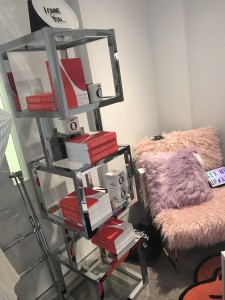 Notre petit coin at All Too Human in Boston

We embark on a wee trip today, first to Boston, then to New York, then upstate to visit a friend whose new house we have yet to see. We have an event this evening in Boston at this terribly chic concept store where we will do “quick-n-dirty” astrology readings for the invitees. I actually enjoy these sorts of events as I find it very good exercise for our astrological minds, having to come up with a profile for person after person who sits with us for a few minutes each. I’m feeling this general uptick in interest in the Starsky + Cox brand—we seem to have become something of a “classic” for readers, especially, within the astrological community. There was a recent article in New York magazine where they asked a slew of well-known astrologers to name their top favorite books and we made it onto the list, chosen by our peers, which is extra special. Recently the site Refinery 29 “interviewed” us (and this piece is meant to appear this week). And I just did a search to see if it was posted yet and saw an article from last March pop up in the Guardian (UK) that was about how millenials are turning to astrology. We are not mentioned in the piece per se; however at the very end they list “the (astrological) app”, and “the (astrological) podcast”, and so forth and we, or rather our book Sextrology is labelled “the book” which is fairly fantastic. Anyway it’s just a vibe but I feel that there is a new momentum, resurgence, happening in our astrological world. I mean, we have plans on that score which are self-started but I’m feeling external forces rallying too—I suppose there is a connection between the two. At least that is a long-held belief and one which we proliferate. It would seem I am writing this entry to day in real-time installments—but am I? Hmmmm.

It was an easy drive up from olde Cape Cod with zero traffic and only a one or too zany Boston drivers almost crashing into us which is fewer than usual. It’s nice to have the Longfellow bridge open again so we can zip right across to Cambridge where I typically drop S. for her usual appointment there and then I sneak via Norfolk Street back to Massachusetts Avenue to cross the bridge and swing around to the Eliot aka home away from home (or one of them anyway). I have a great many ideas brewing in any case and, as with cooking, driving always inspires the going off of cartoon lightbulbs above my head, only, unlike when cooking, I can’t exactly jot anything down; so I just hope that I can remember all that’s coming up during this drive. The room was ready when I got there which is always a great boon and I packed in such a rush this morning, taking more than I need (and probably not enough in some cases) that I look forward to seeing exactly what I ended up chucking into my baggage. It will be a long night and I must pace myself today. I don’t have time for a proper meal before the event so I’m hoping that there will be some lovely finger food.

There was no food, finger or otherwise at the event. The only thing one might consume is champagne and watermelon juice, both of which will send my spiking and only one of which I will sip sparingly over the course of the evening. I wonder if you can guess for which I opted. We were early and I was wearing the only one “outfit” that I can squeeze into after this rather sedintary winter. Unlike the great S. I have not used the dark months wisely when it comes to the management of one’s weight. Oh well, I am a master illusionist at hiding the one area where all my hibernative intake takes the hit, working proportions via short square cashmere tee shirts and a buttonless, cardiganesque Margiela jacket (so-called) with its distinct non-label label designed to spark notice in the fashionisti that will assemble there, starting with the shopboys, one of whom said “I love your blazer” within the first five minutes of being in the store. Is the word blazer now literally back in fashion? It has been fifteen years at least since I even remotely resembled someone who might have a clue as to what was in vogue.

We saw a great many people all in quick succession and I was struck by how young and successful this particular succession was. It was mostly women which is typical, but there were young business owners and artists and designers and photographers and influencers and it made me realize how much Boston has changed. In our generation anyone with such ambitions wouldn’t have stayed in beantown but have high-tailed it to New York City or, perhaps, Los Angeles the second they finished school. But this group of kids have chosen to stay put here and, in our now virtual workplace, are making waves from this provincial northern perch. It cooked up some creative food for thought that’s for sure. A few of our own clients came to catch our eye, which was pretty much the extent of the interaction we could have with them as there was a queue of folk to flop down in front of us onto a pink cushioned footstool flaked with fuzzy pink pillows. All these prop elements had tags on them which, because I wasn’t thinking, I assumed meant they were for sale; it later dawned on me that they were tags from another store–Target, Marshalls, Nordstrom Rack—where they were likely purchased just hours ago as set pieces for the event and the should-beremoval of the tags was lost in the last minute shuffle. Thinking Edina Monsoon leaving the entire production of a fashion show to the last minute, day of. How fashion. To be fair I think the lovely owner of the shop, who has immaculate taste and has really created something special in Boston where nothing like this any longer exists (since Louis Boston shut down), would have just returned from a whirlwind buying trip in Paris and probably Milan. Anyway the event was triumphant and she did a great job. A tenth (what she offered clients as a discount) was being donated to my non-profit Glow (“A Moveable Festival”) and I know that even the clients of ours that showed made some pricey purchases, so I look forward to seeing what kind of donation will come our way.

We stayed later than expected as people had waited so long to see us. Many people took cards from us and I have a feeling we might have a few new clients coming to see us in the weeks again which would be wonderful. Nearly nine o’clock and thank goodness we made a reservation at La Voille because I was feeling pretty faded walking back up Newbury Street—nothing some moules frîtes couldn’t cure!