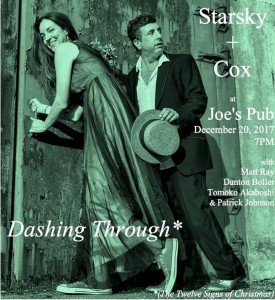 I was thinking on the subject of performance yesterday: In a way we already have a great show in our bag in the “Christmas” show; in that we set it up that the “Christmas Story” follows the same pattern as the Zodiac, and vice a versa; but this becomes a stretch (but a forgiven one) in the Christmas show which is so “uplifting”. While the truth is the “Jesus Story” is what really follows the same pattern as the Zodiac, so we can easily remove anything Christmasy and go more for the parable aspect of being your own personal JC.Starsky + Cox • Cosmic Geezus is what I have in mind. This idea is COPYRIGHTED so don’t get any funny ideas.

I slept very well last evening but I’m more useless today than usual. I’m going with it. Everything will get done in time. I just need more of it. Which means not being in a rush. I have been on such high alert in some ways now for years; it’s been nearly four years since I was dealt a pretty devestating blow in my personal life; and only about six months since being clobbered on the professional side of things in the most extaordinary and ironical of ironical of ways. I have never looked for help and had even backed off utterly in certain areas of my career, only to be offered, without asking, an incredible leg up, or so it seems, as it was all fairy favors going poof.

I remember the summer of 1998 we were putting finishing touches on a book deal and we had friends looking for a winter rental in Wainscott for us while we had set off to Ireland for a few weeks alone followed by a journey back through London to Paris where we got a car and drove to Umbria and then to countryside of the Charente. It was bliss feeling that everything was ahead; and yet, in hindsight, my thinking was flabby, and my spiritual core not so strong. I feel, now, in comparison that I am much better off on those scores. And I’m suprised to discover that feeling to be honest. Where I feel now that I’m lacking is in laughter. I haven’t laughed all that much of late. I know many of us haven’t. And as much as I want to resist laughing off anything serious going on, I wish there was a separate laughter that could happen. There has to be the kind of laughter that doesn’t just let the steam out of the valve so that we “get through” all this. There has to be the kind of laughter, like a Mel Brooks laughter, of laughing at those who think have so much import.

I would totally accept the criticism that this Blague is navel-gazing. However I think, in so doing, staring at the sucker, you can still find universals, even, perhaps, quite readily. So what else about that trip back in the gay nineties? I think I would tell myself not to be in such a hurry. I think I would tell myself to live frugally and bank more cash. I know I would say not to be too tunnel-visioned with things, but to continue to pursue a variety of interests and activities. I have no regrets because they are an illusion. I only have now; and I could easily thread through some of the things I started and stopped over the years (know what I mean? you have those?); but it means getting off the rollercoaster of merry-go-round or whatever metaphorical amusement park ride you now find yourself on. There is nothing like a late cold March to make you feel stretched so very thin, spiritually. I guess, in that regard, Easter comes at a great time for those who put all their spiritual eggs in that particular basket.

I am so ready for another journey like that one, back in 1998, before I knew so much. We did a show a few years back as the opening to the Afterglow Festival and we were speaking of the god Ganesh and how one sings the word Hu and how Dr. Seuss must have based his Horton Hears a Who, upon it. And so we ask ourselves, are we listening out for that, and are we also shouting, hoping someone will hear. I don’t have time to mine all the content I’ve created over the years especially as I spend most of my time creating anew. What to do. What to do.