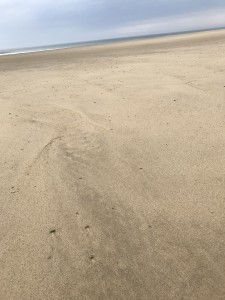 View from a plover’s egg

We didn’t quite make the right decision perhaps to walk barefoot with no jackets on yesterday but such is life: we were given a choice, when the wind suddenly changed to a light arctic, to turn back or brave it, happy to be able to walk on the flats and cross rivulets but at the same time courting Renads. We were sort of flagged down by a ranger who wanted to show us a plover egg. After straining with and without binoculars I just while lied that I saw it lying in sime kind of indent in the sand. Sorry but not sure I did.

I can feel the town of Wellfleet changing. I will reach out and connect to Harbor Stage folks and also the Preservational Hall here in town as I am curious about their programming and such. In all I just want to be connected to earth and sky this season, taking full advantage of time spent in nature, where, along with within, all the answers lie. Feeling a need to connect in similar way with community here; and as a rule my usual point of entry is through the stage door. That will be part of the m.o. beginning May 14 which marks our official return.

I was going to dive into new work today but my spidey sense says I should stick with the larger project at hand and not go off on too drastic a tangent. I had thought that certain deadlines were looming, but realized, as with most things, that they were invented. So I am instead just touching base these various projects to ensure they are on the right track; and then I can go back to the business at hand, which is writing next years twelve weekly horoscope books. It’s a time consuming project which has really taken hold with readers as of yet, but something urges me to write them as beautifully as I might; and to have them at the ready eariler than usual.

We head to New York first thing Friday morning and it will be a very long day of travel and night of socializing; and then a business-design meeting on Saturday morning, before a long drive back. It will be exhausting but it will be worth it to celebrate our friends’ nuptials. I managed to set up a meeting with the Harper Collins speaker’s bureau and have hopefully piqued the interest of a VP at a reputable radio outfit. Little by little we ascend. No climbing just elevation, if not levitation.

Did you ever see the Blake Edward’s film S.O.B.. It’s one of those films I’ve seen snippets of and always sensed, despite a sixty percentile Rotten Tomatoes ratings, would be good. Well, it’s kind of genius actually. There are a good many great moving parts. That sentence was intentional, and something you’ll just have to live with. Speaking of living, I am in the mind of living rather frugally (for reals but also) “on surprise”. And I do think this weekend will provide a bit of a reset, on many levels. I just want to show up and see what I find and be open to whatever comes. I also want to leave some time for shopping because Daddy needs some new threads.

Sometimes the realities, and even the so-called banalities of life provide some semblance of transcendence. I am self-denying in so many ways as to border on self-deprivation; this I know about myself. I am willing and able to allow my environment to become pared-down, and to accelerate this, as a process, by changing my clingy ways. The fact is I have hung on to physical things, that have have no purpose in my life, for ways too long; and it’s time to let go of such things and start to free myself from the consequences of the ties that bind of which I am not full cognizant.

Google search of the day. The best thing to do with your thousands of CDs.