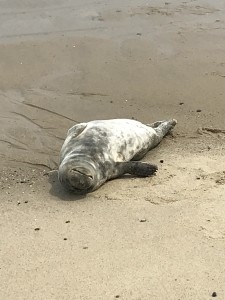 Baby seal on the beach today. Yes I admit privately I was worried it was sick or dying, but I had to go with “blissed out and sunning himself” so as not to alarm S. who was sick herself worrying about it—and anyway it was preening and yawning and didn’t seem stressed out or in distress, although it’s heart or breathing was making pretty rapid moves in its chest. Such is nature in any sense. And since I’ll never know I choose that it be happy and thriving and just in need of some sunshine. It was facing into it, like any determined sun bather.

One of my default “issues” I suppose we can call them is that: I never feel quite caught up, which is a terrible feeling. If I could afford to go and write everyday I would—and, again, I do because I do (at least) this Blague; not to mention delegate all the myriad tasks it takes just to be alive. Anyway, that is a theme that might need to be explored. I never really knew how to write a paper; senior year of high school I determined that I would be in honors-level english even though the year before I was in standard-level (the school had done away with the enriched-level I was in my first two years, and I’d been shuffled down to honors. My mother and I muscled my way into Mr. Mazza’s desirable honors english but I was so behind the eightball, as all these students had been in honors all four years. I didn’t know how to write a paper, while they had all been taught to do so; I got very average grades; however I did very well indeed on the AP test for college and thus got skipped out of freshman, college now, level where I would have again had a chance to learn composition. I never did and I spent four years dreading deadlines and falling short. It was only in the final semester of senior year that someone, a close friend of mine coincidentally, was called on to read their paper in class aloud as “exemplary” that I learned what teachers and professors had been looking for. She should regurgitated what all we learned in class. Oh lord, I had no idea that’s all we had to do. I thought we had to always find “something else” apart and beyond what we were being taught; to discover our own new slice of literary criticism. So I did not so great in college, mainly because I was constantly overachieving.

I’m ready to get beyond the thinking constantly that I’ve done something wrong. It really has become quite debilitating. Admittedly I do do a lot wrong. And who doesn’t? But I do quite a good deal correctly too. I just need to give myself a break and come down off all of it. That sense of dread and deadlines is so deadening. Right, that’s what I was going to say: I still live as if I have some paper due, on high alert, dreading and expecting to fail, even though there aren’t really circumstances instigating that feeling. I’m still dealing with symptoms of a cause that no longer exists. Well not utterly in that I am still a writer despite every attempt I have ever made not to be one.

I worked as an editor and a writer, I suppose, to keep retraumatizing myself with deadlines I suppose. I have always been immersed in words, it’s been one of my worlds. As a youngster, I didn’t much like science or math, especially, (now I’m, mainly philosophically, intrigued by them) because no teacher could ever why…why are we talking about x and y to begin with. What logic is this whole thing based on?Because they didn’t know. And history and language, English et al, were way more my speed. Especially English. I could diagram the biggest sentence you could throw at me with alarming ease. I loved language and had an erotic attachment to the semi-colon in particular. I loved myth and literature, where I felt history and language arts met. I loved all the symbology and metaphor and analagy and simile and I was also intrigued by literary signifiers, the i.e.s, the e.g.s, the sics and so forth. I thought of myself as a person of letters. When I went into magazines within a year of graduating university I became obsessed with the editors marks and the holy grail of that world, the blue pencil.

Being into books was part of the identity of being an ex-pat upon leaving school, and living in Paris one felt the need to emulate those who flanned the streets and sat in the same cafés a scant sixty years before we did in the mid-eighties. Technology was a thin line of light on the horizon; meanwhile we held tight to pencils, pens and notebooks we carried in leather briefcases that might also have a shoulder strap, which gave way at regular intervals as one clipped down wet cobblestone streets with sidewalks to narrow for two way pedestrial traffic.