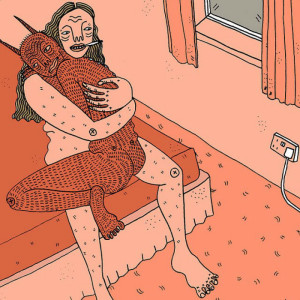 A lot has happened since we were last here. I dreamed I had sex with a devil, that was fun. We never did quite have the sex I don’t think but still; and I remember I was prepared perhaps to pull out some kind of “the power of Christ compells” you incantation to ward off any juju; but I either woke up or the dream melted into another one. I Googled it of course and it’s about a bunch of things like being in conflict, characterized by a direction your taking leading you astray; or that you’re being seduced or tempted into doing something you don’t want to do. It can signal urges or emotions we are not in control of. So it’s the externalization in devilish personification of influences that are undoing us. I accept any and all of those interpretations.

Today feels like the time of year, each year, as a kid, you’d watch The Wizard of Oz; I don’t know how to explain it other than to say I think it was always on TV lat March, around Easter, when the clouds outside often looked like the clouds of the opening credits, creating a seemless transition, over the rainbow, from the reality of (typically Sunday night) suburbia to the Technicolor world of munchkins and monkeys. There was always a mystery, one felt, to be found in the shadows of the scenery or in the characterizations of the Witch’s army, much the way, as a child, you might get lost inside a duvet cover, finding a secret portal to the other side.

There really is no rush for anything. And, with Mercury retrograde, anyway, today, I planned to make black bean soup with the one single jalapeno I bought at WF this week, the one the check out lady even commented on, being this tiny object inside a flimsy green produce bag; but it must have been thrown away accidentally upon unpacking the groceries; so I got in the car to go get another one at the local market and the car (my old Mercedes) wouldn’t start; only slightly turning over. Ironically, taking it out on a rare drive to get an inspection this week, which it passed with flying colors, it must have lost battery from the driver door not quite closing, which it often doesn’t, leaving the inside light to wear its charge down to nothing. So that was a fun haiku of harumpf this morning.

But here I am. And I don’t mind working a bit late to explore all I must explore today. I enjoy few things more than writing, as it turns out; had you asked me that a year ago, I would have said the complete opposite—so this is new.

I remember when we first got the deal for Sextrology, I think I was telling you: We took a trip to Ireland which I’ll delve into sometime; then to Italy and France; and while we were away for a solid month, friends of ours found us a winter rental in Wainscott, for October 1, that we moved to, in a Jeep my father found for me (and I paid for)—now here’s how cynical I am: I will guarantee my father made some money off of me—and it was really rather sublime to be out in the Hamptons but we only made it to the New Year because I had the bright idea to buy a house on Cape Cod, which we did, it will be, twenty years ago, this autumn. The house was called Shine Cottage, as it belonged to Muriel Shine, a woman well into her eighties at the time. It was a tiny ranch, but could have been a dormered two stories; happily though it was exposed wood ceiling and rafters and beams all painted white. It was a five minute walk to the beach down the road; and it really was rather idyllic, except that it was filled with flies, situated near a horse farm. Driving to the house from the main road you passed pastures and pumpkin patches. It was quite near Georgica and very beautiful and now a dream. It wasn’t expensive. Just a thousand a month for a three bedroom can you imagine; nothing like that, not eve winter rentals, can be had for those who could be in the Hamptons in the winter; now everybody can.

I get a sinking feeling when I think of those days, in Wainscott. We made a friend called Tom whose brother Hamilton was friends with Caroline Bisset and rather known in and among the young, shiny faces of New York in the nineties. Tom worked at the wine shop attached to the Red Pony food shop. We became instant friends and he came over for dinner and so forth. We lost touch and then Facebook came around and I didn’t see him so I reached out to Hamilton who I didn’t know. Tom had died, I never found out how. He was a floppy haired Libra like myself, I dare say, still. Nostalgia is a killer and I’m on a heavy dose it seems today. Started yesterday, I was thinking about “tithing” as we typically choose some pointed way to give something to somebody each year; and then yesterday the young man from whom we leased a car, three years ago, came over (and again today with the car) to fill out paperwork; and he broke down in tears launching into the story of his life since we met him, admitting that he took the opportunity to come out to us because, he had sensed three years ago, that we were “different” and actually said “hello” and meant it, being present, I guess. His story is private and multi-layered and sad and, I will say, one feature of was the loss of his older brother. This was the major theme. too, of the Garry Shandling documentary I watched, in two parts, over the last two days.

Something powerfully emoting, emotive, emotional? in the air. And then that devil dream.