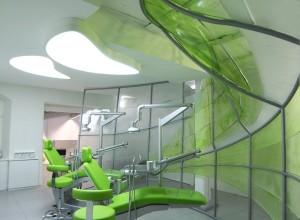 Okay so nearly three years ago we went to this dentist on steroids (figuratively, and probably, literally) about whom many people either rave or say nothing staring blankly. Being neither one of those types of people, I just wanted a good dentist. And this fellow had supported some of my artistic causes over the years, so there was that factor.

I was surprised to learn, as we booked two appointments, that it would cost $1K, in advance for examination and cleaning, and that the payment was to be non-refundable. It was a lot. It was a lot a lot; but we figured it was a good investment. Though I should tell you I’ve never had a cavity in my life; my gums can get a bit dodgy from time to time, but, look Mom, no cavities.

The first odd thing was that the visit began with a tour, mainly, of a shrine of diplomas and other tribunalia, and the female army of dental assists contributed to the cultish feeling around this doctor, who, again, was always very nice. But I would soon learn I hadn’t so much gone to the dentist as been taken to the cleaners. With an ironic twist Because, you see, I never did get a cleaning.

I got a poke around by one hygeinist, I presume, you sort of pre-diagnosed me, pointing to things the doctor would say about my mouth (which he ended up doing, imagine that!). Then a second hygeinist came in and, mind you, the place has a TV screen on the ceiling and the room is super modish and spacious, like getting your teeth done on the Death Star.

I don’t quite recall if, but I’m sure, they took conventional xrays of my teeth; I’ll check my notes; otherwise it’s possible I had had xrays recently at that point and waived it off.

I do know the two started this tag-team dialogue and deep ultra sounded or something my teeth, one by one—perhaps it was sonar—finding what I presumed weaknesses deep inside the bones of my teeth or some other. And every time the machine beeped one or both of them would make a uhh or yup, or a combined uhyup sound, together. This fantastic voyage went on for a long time; and I was told the doctor was coming in and that there was no time to do the actual cleaning —they would do it “soon next time”. Fine.

Doctor comes in and the rest becomes a bit of a blur so I’ll keep this paragraph brief. When he uttered the words you have eighteen cavities I was taken over by a Mars-ruled blush of pure anger; thankfully, being in the chair, not having to look herr doctor in the face. As I couldn’t have disguised the cartoon train whistle foghorn expression I was wearing. Aaa-ooh-ga! cast in red-orange.