Can You Ever Go Bakeri Again 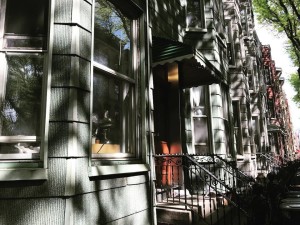 Had quick coffee at Bakeri and then we were supposed to leave after meeting Emily and Joseph, who live across the street from the hotel, for brunch. We had inquired last evening if there was a room but were told they were fully booked. So over coffee we decided that if by some miracle there was a vacancy we would take it. There was a vacancy and we took it. We moved upstairs; it was a smaller room but I liked it so much better. Went to Label, where we were yesterday for lunch, and in came Robert who, of course, it turned out, is part owner. So we hung out a bit. He intimated he might want to open something in Wellfleet; and, frankly, I could be convinced to go in on something like that.

We took a lovely walk around town. It really is quite more expansive an area than I imagined. I don’t absolutely love Manhattan Avenue, but it soon, too, will be gentrified. One can tell. Crappy houses are in the millions. I don’t get life. We had a gorgeous snacky pricey meal at Alameda and had way too much time before we had to get to Joe’s Pub until suddenly we had no time at all to be at Joe’s Pub. We had ordered a car, which didn’t show up. And cabs were not to be found, as it was raining. One swung around the corner, dropping guests off at the hotel. So we took it and it was driven by a twenty-three year old Sikh who was actually born in America and wanted to join the army because this country had been so good to his Indian immigrant parents when they first came to this country. Sorry but this is what being American is all about. Not about some orange fuckface draft dodger. That shit has to go.

Got there to be the last in line. Slid right in. And synchronicity being the name of the game, Damian was at our table. Damian had just lost our friend Randy, which has been terribly sad; but it was wonderful that we were all together. Ray Rizzo was in the band though I didn’t get to hang out with him after. Spoke mainly to Viv and Elizabeth Koke and then the return version of the car that never showd up to begin with was waiting outside. It was another nice ride back over the bridge this time—we had taken the tunnel eariler. Needless to say, after two late drinky nights, I didn’t feel all that special in the morning; my nerves get shot with too much wine and no sleep and it’s not exactly conducive to driving on highways and bridges in aggressive traffice but that’s life.

I’m 12 freaking days behind posting this shite. and I have no idea if the above is even representative of what went down. Oh. You’re getting this Blague and twelve others in quick succession which shall all be a collage of photos what happened on the actual day and my later thougts about it. You’re not reading this anyway. You don’t quite exist. But I’m in a codependent relationship with you regardless.